alright alright alright... we've been a little lazy updating here, sorry about that. We had a shitload of shows since our last update, released a new LP and a 7", toured a lot in Europe and made new plans for the future. Here is what was up:

WEIRDOS ON PARADE TOUR WITH SONS OF BUDDHA (April)
We did a 2 1/2 week tour with our french buddies Sons Of Buddha in Switzerland, France and Spain in April. Paul from the Ratcliffs (Innsbruck, Austria) was playing bass for us on that tour and did a great job! thanks buddy! Thanks to Thib' at Wild Card Booking for the shows and thanks SOB for being such great friends!


EUROPEAN TOUR WITH THE CAPITALIST KIDS (May/June)
After only a little over a week break we went on a 30-show long Euro-Tour in May and June. We flew our american bassplayer Eric from the Jetty Boys, Spruce Bringsteen and countless other bands in for the fun. It was f'n great having him over!! The first leg of the tour we did together with the Capitalist Kids from Texas. Thanks for the fun guys and for being cool tour buddies! Check em out if you don't know em! The second leg we finished on our own. It was a long and exhausting tour, but we are amn happy we did it and didn't miss out on all that fun! Thanks Kasper at Panther Booking for the tour!

SARDINIA MINI-TOUR (June)
Next up was a mini-tour in Sardinia, Italy right after the long Euro-tour. Eric was still with us. We played 2 shows on the island with The Colvins, who also invited us over! Thanks guys!!


GERMINI-TOUR WITH THE ZATOPEKS (July)
In the mid of July, right around the football world cup final, we had a great weekend of shows in Berlin, Nordenham and Leipzig Germany with the best people, the ZATOPEKS. Thanks to Cortina Bob Berlin, Fonsstock e.V., ASTPAI and D.A.M. Booking for making the fun happen! Take a look at what Pete from the Zatopeks was able to put together in that video!! Well done, sir! 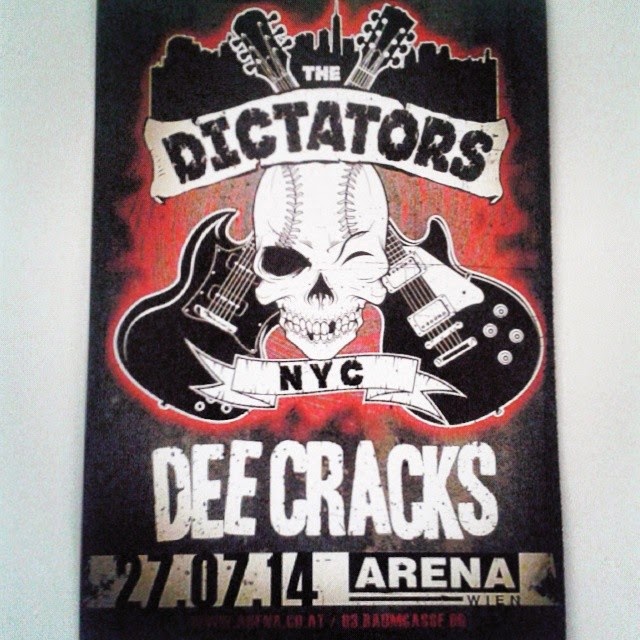 OPENING FOR THE DICTATORS IN VIENNA
On July 27th we also had the priviledge of opening for true legends, the DICTATORS (NYC) at the Arena in Vienna. We really enjoyed the show and it was great meeting those guys!


FUTURE PLANS
What's next? So, we have a tour planned in Europe with the KINGONS from Japan for October 2014. We will also release a split 7" with them. Then, we will play some shows with 7YearsBadLuck in November/December supporting their new album release and we are booked to play the Monter Zero Mash 2014 on Dec. 12th/13th in Madrid and will most likely so a short Spain tour around it. And! Finally true, we will release our Dee Dee King themed split 7" with the Zatopeks soon. They finally came around recording their Dee Dee King covers! It's about bloody time you guys!
That's it I guess...

see you out there
Mike / Matt // DeeCRACKS
Posted by deecracks at 1:14 AM

Amazingrrc.com highly rank one of the best pharmacies offers pain tablets for sale, buy pain meds tablets, buy cancer drugs with track & trace shipment. we have other available drugs and not all listed on our website

We only accept payment through Bitcoin, make sure before you contact us you have your bitcoin ready.