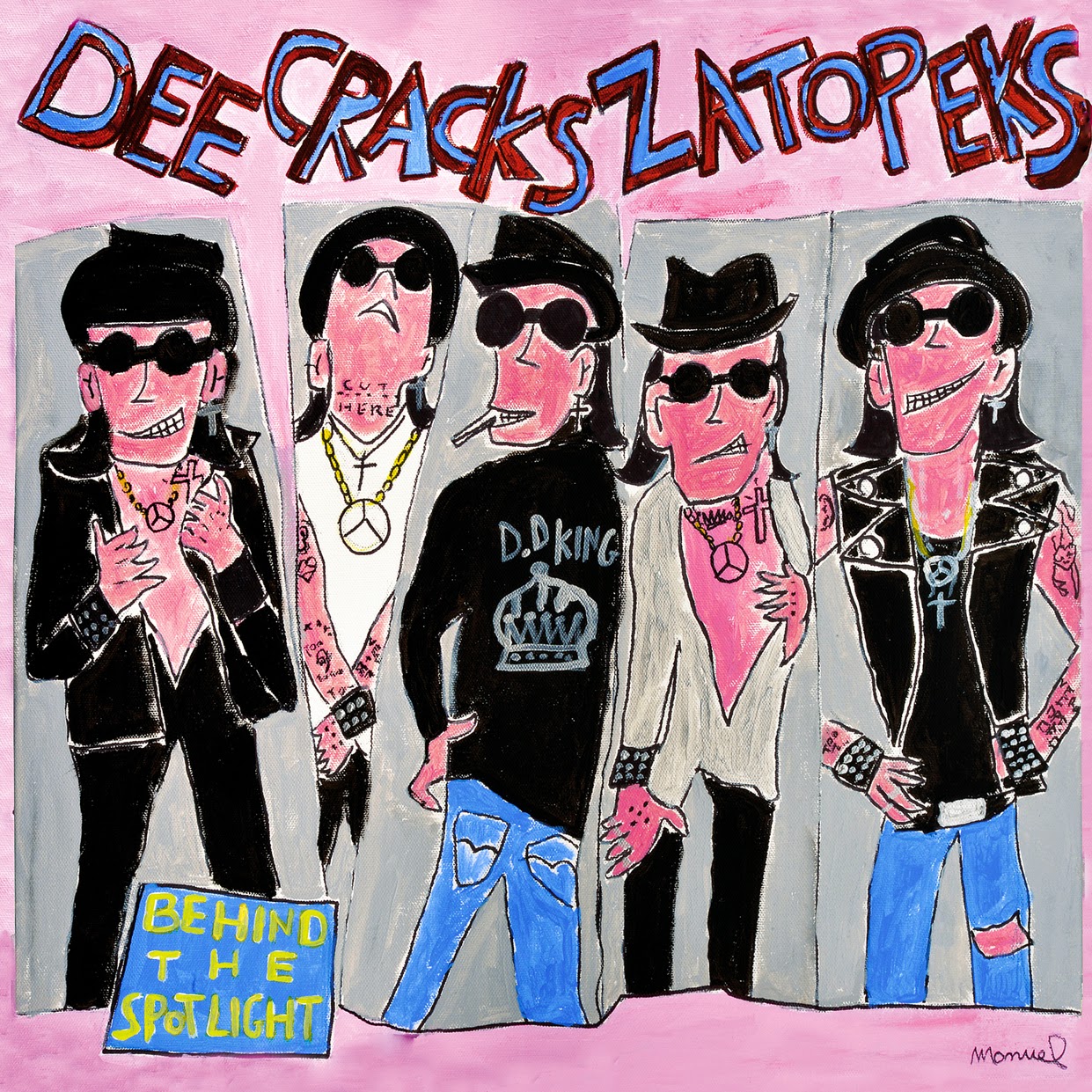 Need some new tunes to cheer your party up, well, there you go.

We finally released our Dee Dee King tribute split 7" with the ZATOPEKS to celebrate the 25th anniversary of Dee Dee Ramone's Standing in the Spotlight LP. The 7" is called Behind the Spotlight and features two cover versions from each band, us covering 'Brooklyn Babe' and 'Poor Little Rich Girl' and Zatopeks covering 'Mashed Potato Time' and 'Baby Doll'. The download code will also get you The MANGES version of 'Emergency', previously released on their 2006 album Go Down.


The 7" is limited to 500 handnumbered copies and is the first ever RAMONES MUSEUM BERLIN release with exclusive distribution by STRIPED MUSIC in Italy, run by Andrea of the Manges. The crazy good artwork was done by the talented Manuel Cassu (Manges) with graphic designs by Mass Mosrite (Manges). Grab a copy at the Museum, the bands merch tables or order it online at Striped -> HERE! The official release acoustic show at the museum will be on March 1st, 2015!

OFFICIAL ONLINE STORE LAUNCHED
We are proud to announce, that we now have our new official online store over at STRIPED MUSIC in Italy. You can find all our still available records on vinyl and CD as well as T-Shirts and other merchandise. Go over and take a look and find more merchandise from other great bands!

MONSTER ZERO MASH 2014
Last weekend we played at this years Monster Zero Mash at the Rock Palace in Madrid, Spain. Lucy Spazzy was with us again to play bass on that party. We had a great time there with the whole Monster Zero family and all the bands and the best party people from all over Europe. Always nice to play at the Mash. Here is a video of us playing 'I Wanted It All'.


PLANS FOR 2015
We already booked shows for 2015 of course and will continue doing so. We will have a weekend trip to Italy at the end of January and some in Austria in February and March. Together with the ZATOPEKS we will do a Mini-Tour through Germany to promote our Dee Dee King 7" in Feb/March.
At the end of March we will embark on a UK and Benelux tour with NOT SCIENTISTS from France. An awesome band, check em out if you don't know them!
CHECK THE DATES SECTION FOR DETAILS.
We have big plans for April and May, but it's too early for an announcement just yet!
Stay tuned!

in the meantime...
fuck x-mas and have a crappy new year
Mike / Matt // DeeCRACKS
Posted by deecracks at 1:20 AM

While unstable individuals don't understand how to say no, and frequently get taken advantage of, confident men and women understand they don't have time for everything. Get detailed info about natural supplements for anxiety and depression on this site.

I would appreciate you that you pick up an important topic to write a thoroughly informative post on. I hope that you never stop and keep posting such valuable content 바카라사이트

Daebak! that’s what I was looking for, what a information! present here at this website 토토사이트

InPage Download is one of the high-quality software typing software for Urdu that Urdu wants to bring huge numbers of people on the market around the world.

window cleaning might be a difficult task w/o the proper tools and professional experience, let us help you do the task and get your windows crystal clear again with our professional Window Cleaning service!.

Here is deep description about the article matter which helped me more.
We offer safe and trusted online site games. 바카라사이트

Your way of telling everything in this article is genuinely pleasant, all can easily understand it, Thanks a lot. If anyone looking for safety playground for online gamers. 바카라사이트