here is what's new in DeeCRACKS-Land:

NEW RECORD IN PLANNING
Oh hell yeah, we're gonna hit the studio again this May to record our fourth studio album. Matt wrote a bunch of new songs already and we are trying to reach a number of 75 working titles total. Further, we're aiming to record 25 songs, selecting around 14 of them for the album. So the rough plan. As always we're gonna record with our best buddy MARCO PERDACHER in Klagenfurt, Austria. We're stoked for the outcome and hope for a great result! We'll keep you updated on the progress of course, so stay tuned!

Unfortunately, this year won't see us touring as much as we used to. We'll play shows of course and you can expect some touring once the new record is out! Real life duties will keep us sidelined a bit until then. We'll have a show on April 1st in London which will be a pre-show to the SCREECHING WEASEL/MxPx gig the next day. It also is Paul Coyote's birthday! So come and celebrate with us!

TOTALLY CRACKED! LP IN THE MAKING
Here is a goodie for vinyl lovers and long time DeeCracks fans. In 2009 we self-released an 8 track EP entitled TOTALLY CRACKED! on CD only for our first ever US-Tour. It earned us 3 nominations at the Punk Rock Night Awards in Indianapolis, IN and won the award for "Best non-local Release" that year. This year BETWEEN THE DAYS RECORDS will release a limited vinyl edition in the USA. It will be a solid LP with all songs from that recording session. It is kind of a missing link between what we were and what we are, as we recorded it as The Cretins back in 2007 right before our former second guitarplayer Marco left the band and before we were forced to change our name to DeeCracks. We're happy this is available on vinyl soon for you all to enjoy! 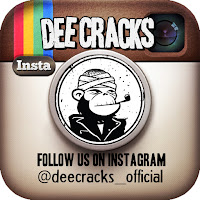 ONLINE DOMINATION
Not touring much gave us some time to catch up on social media and online related things. Aside from the new blog-design, we launched an Instagram account and put our albums up on platforms such as iTunes, Spotify, Amazon MP3, Google Play, Rhapsody and so on. Give us some of your precious money!

PAUL'S THE RATCLIFFS RELEASING NEW RECORD
In other news, our bassplayer Paul is releasing the first full length album with his band THE RATCLIFFS! It's called 'Bubblegum Warfare' and comes out this week on Monster Zero Records! If you happen to be close to Innsbruck, Austria on Saturday, come to the release party at the PMK! We're all gonna be there!

WHAT ELSE?
Mike did an Interview for a brazilian punk community website called WE LIVE IN HELL. Also, he will be filling in on drums for 7 Years Bad Luck next week and the Isotopes on their European tour in April.

so that's what's up,
good night internet
DeeCRACKS
Posted by deecracks at 12:33 PM

I think this article will fully complement you. Please continue publishing helpful topics like this. Regards, from
online distribution spotify

Get to know how to exchange ripple for cash instant cashout money by using paypal account. This is fastest exchange system and you can exhange your ripple XPR coin within seconds and can transfer it into your wallet account with just one click. Visit this site for more details.