merry x-mas everybody,
hope you are all having happy holidays!

We haven't been updating our website a lot this years, there was only one post in march to be exact. haha... so here is what happened and what's ahead for us: 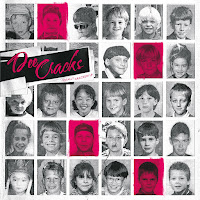 Excited to finally reveal the details of our upcoming release "Totally Cracked LP", out January 20th 2017 on BETWEEN THE DAYS RECORDS in the USA with European distro by the fine folks at STRIPED MUSIC. Remastered with new, updated artwork by Alex Mahola of SCREEN ADDICTS, compiling the Totally Cracked EP, Beach 90 7" and a cover of The King Kong Stomp, which were all recorded in 2007 and released in 2009. This limited release on 200 pink and 300 black vinyl tells our story of having to rename the band from the Cretins to DeeCRACKS and losing 2 members in the process. It is also a tribute to everyone helping us and working with us over the years. Thanks! There is no us without you all!
Preorders are up now though these links: USA / EUROPE

BEACH 90 MUSIC VIDEO
In support of this upcoming compilation release we shot a video to our old classic 'Beach 90' in the original the Cretins line-up. It was edited and directed by DER SABE. Camera by ME Video.


NEW ALBUM IN MIXING/MASTERING
As announced in March we did hit the studio again and recorded 22 new tunes before summer in Klagenfurt with our main man Marco Perdacher! He also mixed and mastered Attention! Deficit Disorder and we recorded, mixed and mastered Beyond Medication with him. The tracks are currently being mixed and mastered. We will pick the songs for the record after that. Expect more news early 2017 on the record title and where and when it's gonna be out. Stay tuned!

SHOW HIGHLIGHTS OF 2016
Earlier this year we were saying we are going to do less touring this year, which was true, yet still we have had the pleasure to play some really cool shows! Just last weekend we headlined this years edition of the MONSTER ZERO MASH at the pmk in Innsbruck, Austria. We had a great tour in November through Germany, Austria, Switzerland and France, including a show at THIS IS MY FEST 4 in Paris. In summer we headlined day one of the very first edition of PUNK ROCK RADUNO at Edoné in Bergamo, Italy and we got invited to London to play the Pre-Screeching Weasel show party. Here are videos of our sets at TIMF#4 and PRR#1, enjoy:


PUNK ROCK RADUNO COMP VOL. 1
As a special vinyl release in connection with the PUNK ROCK RADUNO Festival, STRIPED MUSIC, MONSTER ZERO, IT'S ALIVE, SURFIN'KI and YEAHMAN released an LP compilation with a track from each band playing the festival. A pretty cool release, so check it out here:

WHAT'S NEXT...
We have one more show in 2016 on NYE at Club Wakuum in Graz, Austria and then the new year can come! First show of 2017 will be in Bratislava, Slovakia at Randal Club with the VIBRATORS on January 26th.We will hit the road again as of May and hope our new record will be out by that time also! We are all very excited about it and can't wait to get this all out to y'all! Stay tuned for more info about the new record and show announcements!

Merry christmas and a happy new year everybody!
cheers and love
DeeCRACKS
Posted by deecracks at 8:48 AM

Nice setup with really a classy look. Some time ago I was looking for such an event too, which will be in my budget and the one that is appreciated by all. During my search I found these Chicago event venues and got fully satisfied and I am very much impressed by their settings and helping environment.

thanks for writing this blog men bag brown leather